A CRT-P is an implantable pacemaker for patients with heart failure. The device monitors the heart’s rhythm, detects irregularities and sends small electrical impulses so as to improve its ability to pump blood and oxygen to your body.

CRT implantation is a relatively safe procedure that has become safer in higher risk patients.

Like most CRT devices, except for the MRI Compatible version of the CRT-D, the CRT-P also has some associated risks including, infection at the surgical site, sensitivity to the material, failure to deliver therapy when needed, or receiving extra therapy when it is not needed. You will also have limitations with respect to magnetic and electromagnetic radiation, electric or gas-powered appliances, and tools among other things.

The CRT-P’s longevity at five years is 54 per cent. Newer versions of the device last much longer but they are costlier. In India, these devices cost between USD 1,330 to USD 11,970. 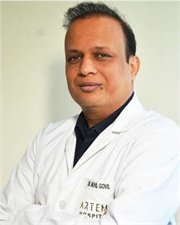 Dr. Mehta is currently working as a Consultant in the department of Interventional Cardiology at Nanavati Super Speciality Hospital, Mumbai. Read More Dr. Aniel Malhotra
Dr. Malhotra has a total of 33 years in specialized Ophthalmology. One of the most advanced centres for Digestive and Hepatobiliary diseases, Nanavati is an NABH and NABL accredited Multi super speciality hospital. Read More